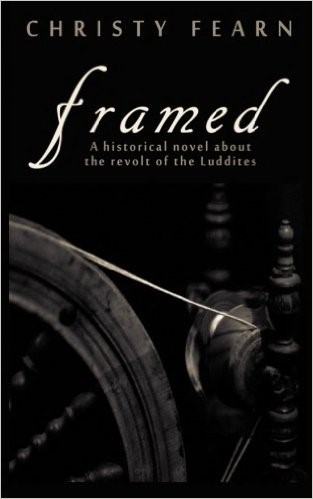 “You’re Luddites!” my friend from the city accused.  “For farming with horses in this day and age!”

A rooster crowed; the goats grazed on the meadow.  My husband and I had been too absorbed in the work of a small farm to have studied this movement.  “What exactly is a Luddite?” I asked.

Framed: a historical novel about the revolt of the Luddites

Framed keeps the reader moving:  we witness the swearing in to a secret resistance group, sabotage and desperate escapes from the pursuing Red Coats, knawing hunger, the labor of weaving, prejudice when we speak our native language, unwanted sexual advances, the reading of Tarot cards, and sexual escapades.

The reader lives this life with Lizette and her twin brother Robert.  They are weavers and French émigré Catholics.  They can only afford to eat watery potato soups while they endure the back-aching work of weaving stockings, for which they earn a few shillings a week.  Threatened with reduced pay or job loss due to the invention of new weaving frames, the twins are tempted to do anything to win their daily bread.

Robert is imprisoned for a crime he says he didn’t commit.

Lizette tries to find a way to help her brother.  She meets Lord Byron, who takes a major role as a champion of the Luddites and of Lizette.  And Lizette experiences first-hand the power of the rich and privileged.

Lord Byron knows what he wants and how to get it.

Christy Fearn does a very good job with this tale.

She shows an oppressed people, and how narrow an option the common man had at that time period in England.  She shows their powerlessness in the face of the powerful.  Lord Byron himself becomes a metaphor; his life is all about power and passion, for sensual pleasures and for morality.

The writing is fluid, the story fast moving, the time and place believable, and the dilemmas felt.  The only historical omission I have noticed is that the two main characters were Catholic at a time in England when Catholics still lived under legal restraints and general disapproval, but the need for carefulness in practicing their religion is not well developed.

Framed is about history but hits on modern problems.

The plight of Robert and Lizette reminds us that immigrants, unpopular religions, and new technology changing the lives of many are age-old challenges.

Now two hundred years later, the British again live in a time of great uncertainty:  the UK has voted out of the EU, the pound is at a 168 year low, and the ordinary people are again those who will likely suffer most with the results of the changes.

“Those with nothing left to lose, they are truly dangerous.”