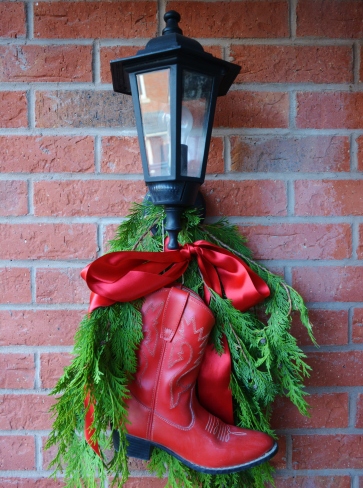 You may think we hang upside down from the rafters at Christmas, or throw purple socks in the air for New Year’s.  Actually, our wackiness comes from living in different places.  Nomadic details follow.

In Texas in the 8os and 90s, it was considered chic to put a rustic wreath on the door at Christmas time.  Rustic meant made of barbed wire—rusty was fine.  To add further panache, we attached one cowboy boot to it.  For more power, we added big hot peppers.  Hijole!  Dios mio!

Arriving in Austria, we found Christmas started on the dim eve of December 5.  We stood in our snow blanketed village  and held our trembling toddlers in our arms while a terrifying parade came slowly down the street:  Sankt Nikolaus in red and white sat in a wagon drawn by eight Krampuses.  These were furry demon creatures with goat heads and horns and sporting chains and whips, and they were followed by a strange man in black formal wear and top hat whose role was to keep the beasts in check.  As the Krampuses (young men in costume) chased children and pretty girls, Sankt Nikolaus threw candy to the children, who ran around in the snowy moonlight screaming and picking it up. This event was called Krampusnacht.  Furchtbar!

On the eve of the 24th, the Christ child Christkind brought presents to the children.

Silvester.  On December 31st at midnight we left our warm house and joined neighbors with lanterns on a chilly hike through the moonlight to a high mountain pass.  There, we toasted the New Year in with a hot alcoholic drink.  Prost!

In Italy, each city and region has its own holidays.  We lived in the beautiful city of Verona, where traditionally the big gift giving day is December 13th in honor of Santa Lucia. She was a Christian martyr who became popular in the 13th century when there was a terrible eye disease affecting many, especially children.  A pilgrimage was planned, and to encourage the children to walk in the December cold, the parents promised that when they returned, their shoes would be full of presents.  The miracle happened, and the city became devoted.  Thus, on the night of the 12th, our children and their friends put out coffee for Santa Lucia, wine for her escort and a carrot for her donkey.  And were delighted the next morning to find their shoes filled with presents.

On Christmas Eve, Babbo Natale brought more presents, and we went to midnight mass.  (The Babbo Natale/Santa Claus tradition only started after the mixing of soldiers from various nationalities in WWII Italy.)

In Italy on January 5, Epiphany Eve, came La Befana.  She is an old witch in a black shawl riding on a broomstick, and bringing candy to good children and coal to naughty children.  Again children receive gifts.  The history of the Befana tradition: when the Three Wise Men were searching for the Christ child, they stopped in a certain town and stayed at the house of the best housewife.  After they left, she went in search of the Christ child herself, to bring her own gifts, and each year she flies forth, searching still, dropping gifts down chimneys into the stockings of all children.  Che gioia!

In Geneva, Switzerland, a UN city of hundreds of cultures and languages, there is one local tradition that brings everyone together.  L’Escalade!  This celebrates the city’s defeat of the surprise attack by Savoyards troops on the night of December 11-12, 1602.  The city was first alerted to the attack by a woman who looked out the window and saw the intruders scaling her wall and poured down boiling vegetable soup.

To celebrate in the schools, our children were encouraged to wear costumes from this historical time period and to take vegetables to contribute to a huge cauldron of vegetable soup for their lunch.  For dessert, a big cauldron made of chocolate is brought out and one student gets to smash it and shout, “Ainsi périrent les ennemis de la République!”  Thus perish the enemies of the Republic!  When smashed, out fall hundreds of marzipan candies shaped like vegetables, and chocolates wrapped in red and gold, the colors of Geneva.  The children scramble for them and eat and shout.  C’est bon!

The Course de l’Escalade, a foot race for adults and children, takes place on a weekend near the festival.  The weather is often terrible.  My husband stood watching in a huge crowd of miserable, wet parents as our eight-year-old son ran the 2.3 km race in pouring rain on a bitter cold day.  On y va!

In England, Christmas starts early. Already in November we watched our neighbors begin to decorate their houses with lights and put up trees.  As this is the darkest time of the year in a far north country, these spots of cheer really help!

In December our young children rushed home from school and said, “I got Christmas cards from everyone but didn’t have any to give them!”  So I hurried out to buy a lot of cards.  And the neighbors and friends gave cards, too.  Very lovely!

Friends explained, “Here in middle England and to the north, we say Santa Claus, and to the south, people say Father Christmas.”  The Father Christmas name is a result of the Reformation, when it became unpopular to use a saint’s name, and some Europeans began calling the gift giver after Father Christmas, a character in stories from the Middle Ages.

Now to end with a popular English refrain at this time of year,

“Are you all sorted for Christmas?”

11 thoughts on “Five Festive Traditions of My Wacky Family”