A Texas Ranching Adventure:  They Paid a High Price

The Tree Was Witness

An ancient pecan tree was witness to the Jacksons’ violent deaths and, 140 years later, the tree provided shade for the people gathered together to remembering the Jacksons’ fates.

Below this huge tree, on April 19, 1998, on our ranch in Mills County, Texas, my husband and I hosted a historical marker dedication to commemorate the pioneer family that was attacked and killed in 1858 on that property, in one of the last area Indian confrontations.  Over a hundred people attended the dedication, including locals, descendants of the Texas Rangers who rescued the surviving children, and their many descendants, who traveled from all over Texas and from as far away as Arizona, Colorado and Georgia. 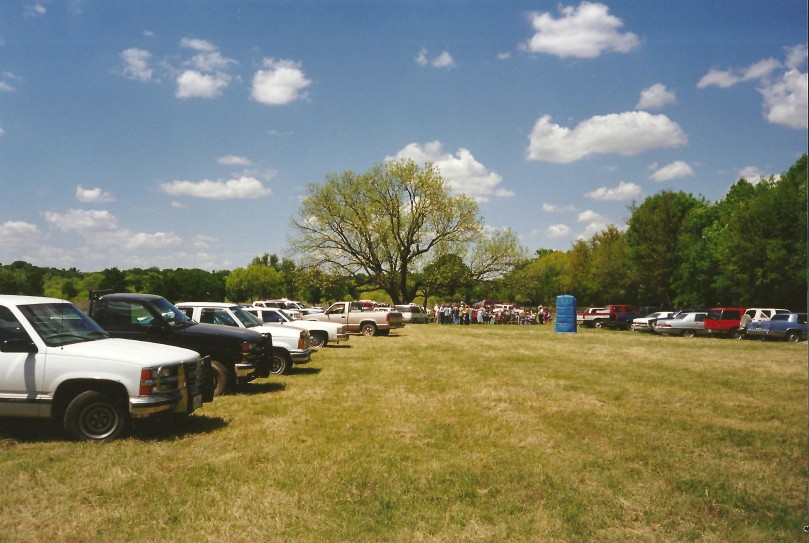 A quarter mile from the pecan tree were the Jackson’s graves.  The two communal graves were a hundred yards apart and covered in sandstone slabs that had shifted with the passage of time.  The wild grasses and nearby pecan trees and shallow creek would have looked remarkably similar at the time the dead were buried.

My husband and I, whether herding goats or mending fences, always passed this spot mindful of the Jacksons and their eternal presence in that place.  It could be felt there, and affected what my husband said in his welcome speech to our visitors at the dedication.

“This beautiful piece of land speaks clearly of the temporary nature of all tenure.  We own this land today, many owned it before us and many will after us.  This process of obtaining tenure is largely unvaried and simple:  an individual or a group falls in love with land that does not belong to him and he executes the steps necessary to obtain control.  The necessary steps and the price have changed with time.  People told me that I paid too much for this land.  Is that true?  Looking at the graves in my field, I realize that the price was much higher 140 years ago.”

The historical marker, set up on the highway near the property tells the Jacksons’ tale:

Settlers Moses and Lydia Jackson set out one morning in October of 1858 with four of their seven children to spend the day with friends. As they neared their destination they encountered a small party of Indians, possibly Comanches. Louis and I. J. Jackson and their parents were killed immediately. The two middle children, Joshua and Rebecca, were abducted, only to be abandoned after almost two weeks. They walked for two days before being recovered by a search party of settlers and Texas Rangers near Sweetwater. The Jackson family was buried where they fell, a short distance from this site. (1998)

The surviving Jackson daughter years later in 1911 dictated this longer version of the tale to her daughter Ellen.

One day in October 1858 my family traveled in a hack planning to work with neighbors, the King and Kirkpatrick families, to harvest pecans, as the crop was abundant that year, and to cut a tree for board timber.  About four miles from home, we saw some men ahead and took them to be the Kirkpatrick boys, but on approaching nearer, realized our mistake.  These men were unfriendly Indians.  My father turned the wagon and team to flee but the Indians ran alongside and killed him.  The rest of us might have gotten away, except no one could grab the reins, and the team of horses ran the hack against a tree in their panicked flight.  Then the Indians killed my mother, my elder sister Louisa and the baby I.J.  Joshua and I, ten and eight at the time, were taken captive and rode with the Indians for about two weeks.  One day we were told to stay put while the Indians went in search of water.  Instead, as soon as they were gone, we fled, hiding and running, trembling with fear and hunger, on bruised and bleeding feet.  We were found by Texas Rangers a few days later.

The Texas Rangers had discovered the Jackson’s mutilated remains a day after the attack and performed a funeral and burial.

The story of the attack and rescue has been told and retold through the years and exists today in various versions, but the history written on the historical marker contains the unchanging core.

My husband and I had given permission that the marker could be put up near our property and we offered to host the ceremony because the Jackson’s graves were on our land.

The ceremony was colorful, full of remembrance, music, and history, and very patriotic.  There was a full line up of dignitaries, including politicians and the sheriff, members of the Texas Rangers, the Goldthwaite High School Band, and a response from a Jackson family member.

The band played the Star Spangled Banner, and all sang Beautiful, Beautiful Texas.  The history was given by local historian Lee Roy Yarborough who’d hunted down the many versions of the massacre and located the graves, and a tribute in verse was recited by the local poet A. R. Whisenhunt.

Then we sang the first verse of Texas, Our Texas, and finished with America the Beautiful.  After the ceremony, cookies and punch were served by the historical society.  And our friend Levi Truett Auldridge offered horse drawn carriage rides back to the grave site in his long carriage driven by a team of American Paints, while Levi’s pet Bantam rooster, called General, rested on the seat nearby, giving the event a circus air.

Click here to read the first story in the Texas Ranching Adventure series.

7 thoughts on “A Texas Ranching Adventure: They Paid a High Price”